THE PUBLIC'S TAKE ON PICASSO'S INFLUENCE

In research for this project, we created a survey. It asked the public what they thought of Picasso, if they were familiar with his work, and whether or not they believed he was influential to Contemporary Art and Culture. Among those who took the survey were Art students from Columbus State University , Augusta University and Urbana High School in Maryland. The results are shown below as of 4/25/2019: 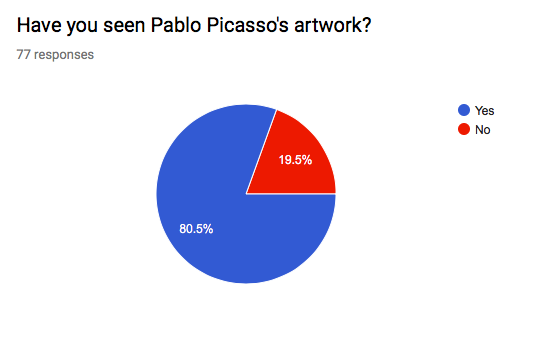 More than half of the people who  took our survey had seen some of Pablo Picasso's work which allowed us to see that most of our society had a good understanding of how important Picasso is to our Modern Art society . This could have been made possible by the fact that Picasso is widely and famously know and with modern technology it has made it easier for people to look up some of his work. 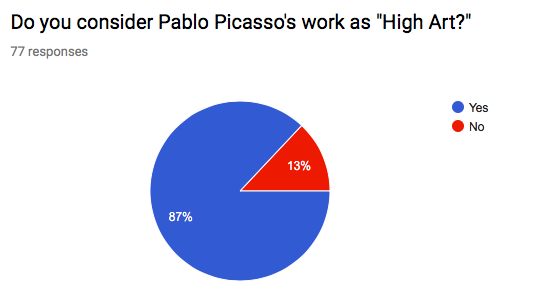 On this part of the survey a lot of people thought of Picassos art as "high art" , this could be because he had some of his pieces that have been renowned as words most famous such as Guernica, he is also among the most famous artist known; this could also be part of how as a society we have been conditioned. We think simply because Picasso is famous for his work and is exhibited at high end places and just one of his art pieces sell for millions then it should be "high art", either way Picasso has made a name for himself. 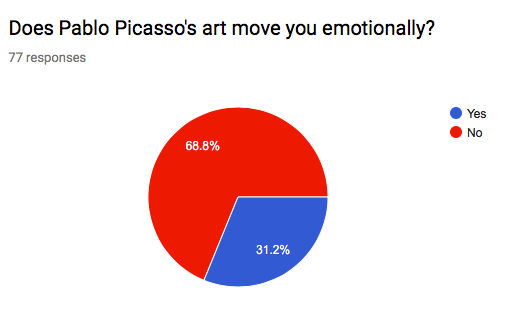 For the question "Does Pablo Picasso's art move you emotionally?", it can be seen from our current results that a majority of people our age are not necessarily emotionally moved by paintings created by Picasso. This does not rule out the possibility that  Picasso's art can be emotionally moving; it just shows that the themes do not resonate with people aged 14 to 26. 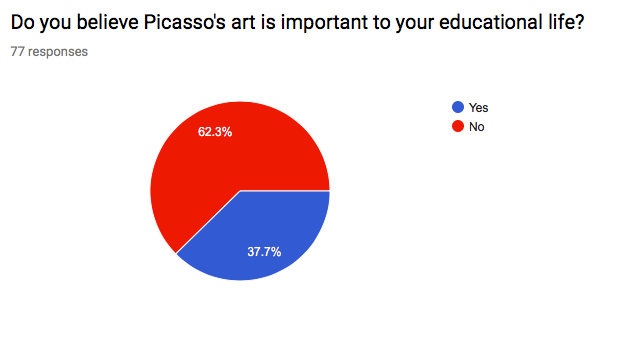 Of the 77 responses, 62.3% said that his art was not important to their educational life. However, depending on one's major, this would effect their answer. For an art major, Picasso's work would be important to their education. We can conclude from the answers that most people may not realize that Art is an expanding field of education and it does necessarily mean studying of paintings. Art education provides critical thinking for people at all educational levels and it connects us not only with our culture, but others as well. 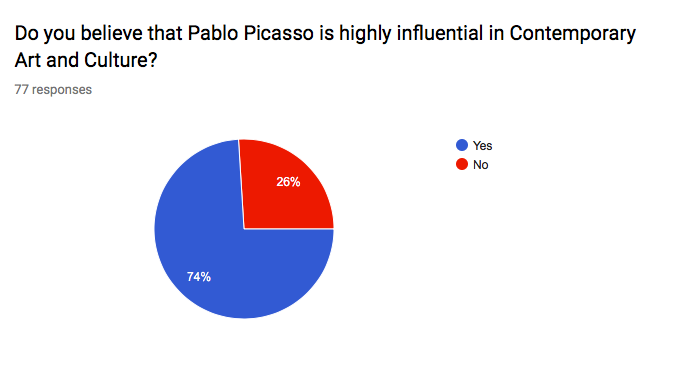 For this survey question, almost 3/4 of those that took the survey found that Picasso is highly influential to today's art/culture. This is likely because of the fact that his name is widely recognized as one of the greatest artists of all time. It is also likely that these results come from the rationale that his methods are still being analyzed so heavily and recreated by other artists of the time.
INSIGHTFUL OPEN-ENDED RESPONSES:
We had many responses to our open ended question, some of surveyors did not take it seriously and wrote very unhelpful answers, while others wrote how moving Picasso was to them and how experienced they had become:

​"He is influential to both modern and renaissance art."

"His art is basic in the sense that it applies to the life he lived, but is made complex by his stylistic choices."

"His technique is far different from others and stands out which is something our generation can use."

"You can feel the emotion and 'see' the story in a lot of his work but he also has pieces that are light and seemingly meaningless that break up the intensity of other pieces."

In general, responses included the influence Picasso had on the art community, as well as the many changes that he made to how we view and make art ourselves. Multiple responses explain how Picasso's art had simplistic ways to it, and how it also included a variety of complexities. Picasso's work, to many people who took the survey, was something that inspired others to be unique in their own artistic ways.
For updated results, we invite you to take the survey, where the link is provided at the bottom of our page .